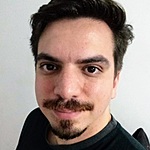 Daniel Queiroz Porto
posted to: Projecting the water in perspective
August 4, 2020 12:48am

Couldn't see any difference at the end of the tutorial

After I finished all the steps in the tutorial, there were no perspective deformation to be seen.

I found it odd, but kind of makes sense doesn't it?

I mean if multiplying it by the identity transform gives back our points initial coordinate, then doing:

Without making any changes to the uniform transform will keep things just as they were, right? And since our transform is identity at this point, projection.z will be equal to 1 as well, so it won't change anything as well, I imagine.

But I didn't know how to change the uniform transform to reproduce the perspective effect, and messing with the values I could see clear changes but none in the direction I wanted, so I went to explore the demo in the project source to see how you were changing it in the final product.

I think it would be nice to have a paragraph or something giving some directions for us to experiment or, if that's coming in the next part (haven't read it yet) maybe not finish this one with an image with perspective applied, and just say we will learn how to manipulate it later?

If I should have seen a perspective effect even before messing around with the transform uniform values, than there's something wrong in my code and you can disregard this comment haha.