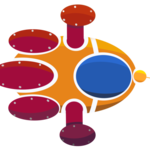 About preload() function and the way it works

There's one thing i'd like to confirm concerning the preload() function and that's when it is called (english isn't my first language so forgive me for any mispellings / grammatical errors).

If i understood correctly, in the Scoreboard script, preload() is called inside the add_row() function, return a resource (precisely a PackedScene) which is then turned into a node through the instance() function, node that we nest inside ScoresColumn through the add_child() function.

So the way we learned it through the GDQuest learn-to-code app (by the way, thanks for this great teaching tool!), the preload() function should be called when the first instruction of the add_row() function is executed except the Godot documentation seems to indicate that preload() is actually called when the script is loaded (which makes more sense to me) so i'd like some precisions on the matter. Is preload() something like a special function that Godot automatically search for when loading a script? I feel this is the case because of the following lines written in the course:

"It’s a special function that tells Godot to load the scene once upon launching the game and later keep it in memory."


If that is the case, does it work like a web cache? Keeping the resource in memory so that every other files can later access it without Godot having to load it twice?

I just feel i should ask because the preload() function seems to be in quite a lot of Godot projects' scripts and understanding how it works seems relevant to me (I apologize if it is explained later in the course, i didn't check  because i wanted to understand that part before going into practice projects ).

On a separate note but still related to preload(), i want to point out to beginners like me that right clicking on a scene in the FileSystem dock then choosing "Copy Path" instantly gives its resource path which is a very nice shortcut.