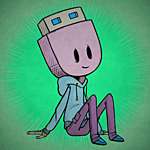 Turret with script in Screenshot

In that last screenshot, the Scene's tree has the turret with a script attached. I spent some time trying to see if I had skipped a step where we had to attach a script to the object, like in the previous lesson, until I read the last line that said that the script would be written in the next lesson.